ShopTalk had their first European ‘outing’ in Copenhagen in October, with a three-day event that gathered some 2.500 delegates for three days of networking, meetings, keynotes and presentations. The IR team was there for the whole event and we were busy from dawn until (nearly the next) dawn catching up with retailers and innovative vendors from Europe and the US.

I gave a speech on the final day with six lessons from the IREU Top500 ranking of Europe’s multichannel retailers, brands and ecommerce pureplays.

Our own @ianjindal sharing the findings and trends of our RetailX research. A packed room in the #shoptalkeurope theatre pic.twitter.com/9WdH2TICKm

41% of all consumer visits in Europe goes to 2 websites: #Amazon and #ebay. @ianjindal #shoptalkeurope pic.twitter.com/wUt8kBDtLM

I was pleased to renew my co-operation with the team at Postnord’s Ehandeldsforum and travel to Boräs in Denmark to speak at their 2017 event.

The venue was fantastic – a former train maintenance shed that had been converted into an event space – and the production values were extremely high.

My keynote opening session was a Q&A and I was grilled, supported and made to look sensible by the excellent chairing of the day’s host, Beata Wickbom.

Brilliant start of #eforum17 with @ianjindal !

Customer profitability over a two year period is the best KPI (LTV) what is the lifetime value of your customer? @ianjindal #eforum17

Thanks to Brand Quarterly for publishing my article on the challenge of ‘silos’ in retail. Charged with being simultaneously agile/flexible and stable/optimised, organisational silos were an answer to the latter, yet create a barrier to the former. In this article I discuss the balance that retail leaders must strike in order to benefit from flexibility as well as efficiency.

The Eternal Battle In Multichannel Retail: Flexibility Vs Efficiency

These are my links for June 25th through June 26th:

I’ve just had an editorial published in the Raconteur supplement in The Times, in which I argue the role of ‘carbon-based life-forms’ over and above robots. This piece was a counterpoint to the ‘store staff have no future’ debate that’s frankly ignoring the point: as retail becomes increasingly about stories and experience, it takes wonderful staff (not just wonderful robots) to bring this to life… 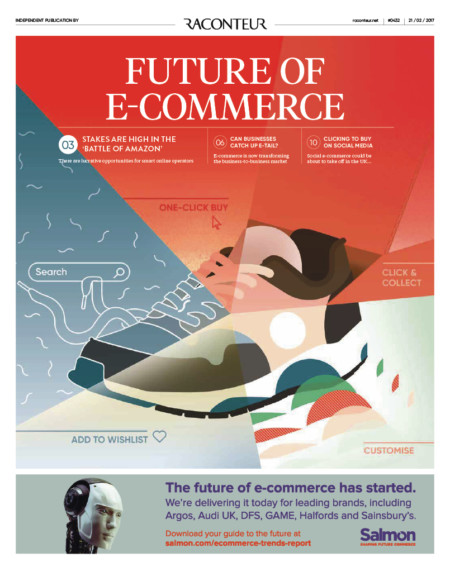 Looking forward to speaking at the upcoming eCommerce Trends Poland. This will be the fourth time I’ve spoken at the NoNoobs-organised event and there’s always been a full house and lively discussion.

This time I’m taking ‘competing with/alongside Amazon’ as my theme. Amazon is of interest to Polish merchants for both the growth opportunity and the threat. Even though Allegro.pl is a pan-European powerhouse of a marketplace, somehow the encroachment of Amazon is seen more as a threat. In my presentation I’ll look at the areas for merchants to sustain their independence, to work with Amazon and thrive in a multichannel world. At InternetRetailing we’ve know aDigital – the Spanish Association for the digital economy – for a number of years, so it was a great pleasure to be able to join them in Bilbao for their FashTech Conference on 29 November, 2016.

The event was very well-attended, with some 450 delegates at any one time in an impressive venue – the Azkuna Zentroa – a mixed-used community conference/cinema/expo/meeting venue… a bit like a mini Tate Modern just for meetings and events!

I took as my theme some of the learnings from the InternetRetailing IREU Top500 ranking and in particular the challenges of connecting with connected customers, at scale, repeatedly and at profit.

I had not visited Bilbao for about 25 years and so the renaissance in the city was remarkable. More pleasing that that, however, was the really local feel to the city. That evening, as I got lost on my wanders, I bumped into people who’d been at the Conference and came up to me, chatted (and pointed me in the right direction). I’ve never experienced that before.

You can see the video of my presentation here, along with some kind tweets.

#irc2016 is now open for business as our good friend @ianjindal takes to the stage pic.twitter.com/7z3XFXblf2

You can see the write-up of the event and also videos of proceedings on the conference site, but a particular thanks to Tony Rivenell of Halfords who was game enough to do a Q&A on the role of the Chief Digital Officer during our keynote sessions…

I’ve long been a great fan of the IADS and have contributed in the past to their events. I was therefore particularly pleased to be invited to open their conference in London on Omnichannel/multichannel on 15 September, 2016.

Department stores have been at the forefront of multichannel development in the U.K. And Europe and so it was interesting to share with them the research from our IREU Top500 2016 report, which created a performance-based ranking of Europe’s multichannel and pure play retailers. With delegates from the EU, Asia and South America it was an international gathering.

While the presentation and discussions were confidential, the IREU report is available from InternetRetailing – www.internetretailing.net/ireu